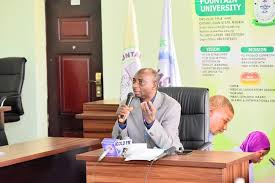 If you’re an educational professional who are looking to progress into management and consultancy, or an educational planning or development role, this is the best degree for you.

Amidu Olalekan Sanni is a Professor of African and Middle Eastern Studies with the Fountain University, Osogbo Nigeria. He graduated with First Class in Arabic Language and Literature from the University of Ibadan in 1980 and completed a PhD programme at the School of Oriental and African Studies (London) in 1989. He taught at the Lagos State University (1984-2018). His research interests cover literary and linguistic studies and West African manuscript studies. He has won a number of awards, including the British Commonwealth Scholarship, the Alexander von Humboldt fellowship, the Leiden-Scaliger Fellowship, and the Chevening Fellowship at the Oxford Centre for Islamic Studies. He has participated at many international conferences and has been part of the guest trainers on the Timbuktu Manuscript Project. He has served as a Visiting Professor at a number of international universities.

He is a fellow of the Royal Asiatic Society of Great Britain and the British Society for Middle Eastern Studies. He has over 200 publications to his credit made up of books, journal articles, book reviews, in Arabic and English.